Dr. Stanley Truhlsen, College of Medicine Class of 1944, and was faculty in the department of Ophthalmology from 1951-1993. 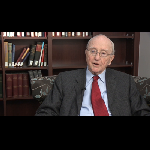 Dr. Truhlsen begins his interview with a discussion of his background, childhood, and his early experience in school, where he was accepted into the University of Nebraska Lincoln, and later the University of Nebraska Medical Center. He also talks about his experience meeting and working with Warren Buffett, and the role Buffett played in helping him secure an early education. He finishes the interview with his thoughts on the Truhlsen Eye Institute, and some stories about his time as an ophthalmologist. Transcript of an interview with Stanley M. Truhlsen.

© Copyright 2021 University of Nebraska Medical Center
©2022 Preservica
We use cookies so that we can provide you with the best user experience possible. Click Accept to confirm that you are happy with us to use cookies.